Fear is temporary but regret is forever

Hi smart people, howdy? hopefully you always have the abundance of happiness, health and prosperity, today I would like to share about “fear is temporary but regret is forever”, the meaning of that topic is there is nothing we can do when we are faced with regret but there is opportunity we can do when we are faced with fear, there is nobody can escape from his own fear but sense of fear will not come automatically unless we lure it with complaining habit, now the question is what we can do to avoid the fear; raise higher standard constantly and embrace the failure, the main reason why embrace the failure can avoid the fear because failure is part of training process, we shouldn't fear why we get failure because it's kind of progress, we should fear when we lack of failure,  fear is will not curse our lives as long as we don't focus on the obstacles, if we focus on the obstacles, our mentality will feel burdened, now I understand why most people fear with the future because they are not strong enough to face the truth, sometimes truth will anger us because truth will set us free from self-ignorance and comfort zone, what I review in reality is most people who refuse to see the reality is going to get feared with their own decision, whereas people who learn from reality, they keep trying although there are many unsuccessful attempt, fear is going to control you if you allow untruthful information will enter to your mind, uncontrolled fear will cause a bad temper character appears, here is the note; fearful person is not kind of person who lack of discipline, but he has bad temper character and he usually doesn’t like when the truth will unveil his identity. 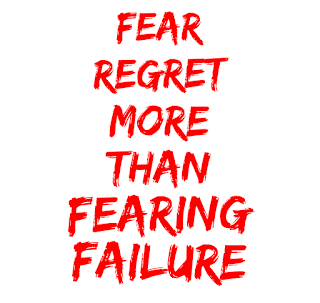 Too much fear about the future is not good thing because it will effect to our mental age, the more we magnify our fear about the future, the more suffering will dive into our subconscious mind, here are several factors why people fear to face reality; 1. Love to procrastinate 2. Lack of practice 3. Betray their own dream 4. Their standard of skills don’t meet with the reality 5. Lack a sense of urgency, now let me explain the reason number 1. love to procrastinate is one of the big factor to create sense of fear because act of procrastination influences people to enjoy with their past memory rather than enjoying their own future plan, here is what people forget namely they don’t realize life keeps moving forward, not moving backward, if people don’t love with their future, means they will live fully with their own fear, whether they like or not, life will push every person to go to their own prophecy, now the number 2. Lack of practice, people who take don’t seriously plan how to create the future’s design, people will fear to see their own future because their vision can't reflect what they will get in the future. I think keep practicing about their expertise is going to diminish the frustrations , reduce the uncontrolled fear and destroy their mental block, now the number 3; betray their own dream, means, people who have low standard, they tend to underestimate the power of dream and they consider dream is myth, when people have no dream, they have paralyzed their subconscious mind, now the number 4; the standard of skill don't meet with reality, means, we need to raise our standard of expertise in order to fit with high demand in the reality, now we will realize the main reason why we need to get out of comfort zone because reality in life will reject the inconsistent attempt, the number 5; lack a sense of urgency, means, if people don’t do something urgently, the future will not come urgently in our time zone,  I think my explanation is enough, hopefully this article can give you an idea how to improve your life, good luck.

Email ThisBlogThis!Share to TwitterShare to FacebookShare to Pinterest
Labels: Character, Habit, Self Control